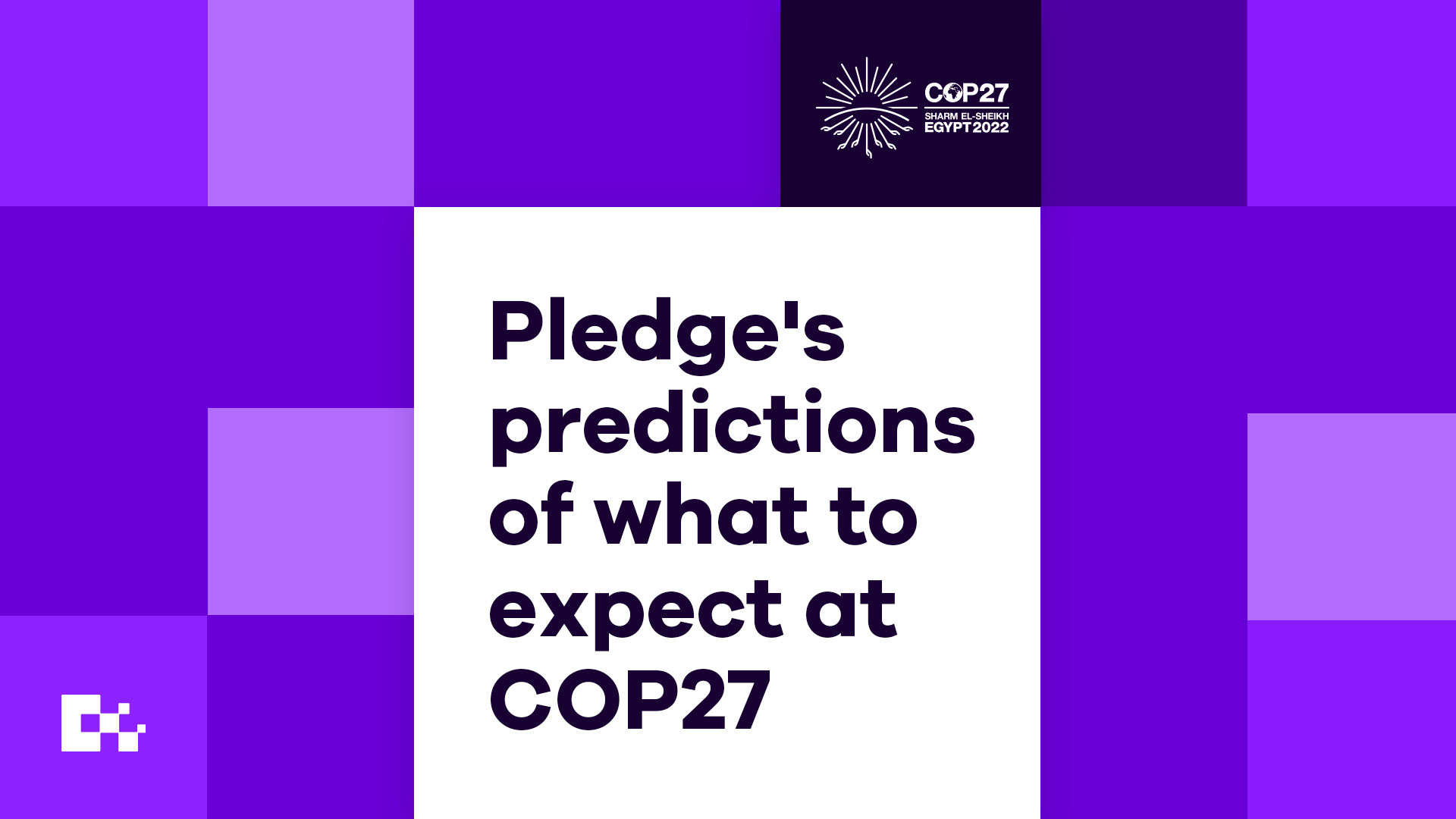 Pledge is attending COP27. But what can we expect from the 27th United Nations Climate Change Conference? Here’s our overview of the key themes that have been announced and our lowdown of what the conference is likely to mean for businesses engaged in logistics.

The main themes of COP27

Many of the top COP participants and organisers have stressed that this years’ conference needs to be about practicalities. The world is currently not on track to limit climate change to the levels stipulated by the Paris Agreement. Global emissions continue to rise, despite the Intergovernmental Panel on Climate Change (IPCC) stipulating that in order to meet these goals, they need to fall between 2020 and 2025. If we want to limit global warming to as close to 1.5 degrees as possible, we must halve global emissions by 2030. This is why COP27 will be focused largely on the practicalities of making this happen.

The emissions reduction plans agreed on by the G20 countries at COP26 were generally perceived as insufficient to limit climate change so there is hope that COP27 will be an opportunity to draw up more stringent proposals. The implementation of these pledges has been seriously stalled by the war in Ukraine and the resulting cost-of-living crisis, which saw many countries rolling back the limits on domestic oil and gas production to cope with energy shortages. Opening new coal mines in Europe and the US is likely to seriously derail progress towards the targets set by the Paris Agreement and may prompt other large-scale fossil fuel producers to also scale down their decarbonisation plans.

There is an expectation that this year, the focus will be on practical strategies to enable individual countries to deliver on their respective climate commitments. COP26 saw the announcement of a wide range of agreements, including the pledge to remove methane emissions and a pact to protect forests. But while these were signed by varying numbers of countries, the Glasgow Climate Pact was agreed by all nations that are parties to the Paris Agreement.

The pact requires all parties to strengthen their nationally determined contributions (NDCs) to align with the Paris goal. NDCs are central to the Paris agreement and outline the efforts of each country to reduce national emissions. COP27 is likely to see discussions around the progress made to date around the revised NDCs, and what else needs to be done practically to support each country in achieving its 2030 emissions reduction targets. The pact also requires the United Nations Framework Convention on Climate Change (UNFCCC) secretariat to produce a synthesis report on long-term strategies put forward by participating countries. This is due to be presented at COP27.

While climate injustice was high on the agenda at COP26, the general consensus was that the conference didn’t do nearly enough to address the issue. This year, there are high hopes among many leaders of African nations that COP27 will address the fact that countries which contribute least to the global carbon footprint, often suffer the most from its effects. Egyptian Foreign Minister Sameh Shoukry, head of COP27, said that: "Despite generating less than 4% of global emissions", Africa was "one of the [regions] most devastated by the impacts of climate change.”

An important outcome of COP26 was a commitment by richer nations to provide low and middle-income countries with $40 billion annually in ‘adaptation finance’ starting from 2025. This money should be dedicated to protecting communities from the impacts of climate change. Adaptation finance will be top of the COP agenda again this year, with a proposal for the official implementation of a ‘loss and damage’ finance facility.

What is COP27 likely to mean for businesses engaged in logistics?

There is still a lot of speculation about what COP27 is likely to mean for businesses. Here are three topics which we believe will be likely areas of focus.

A global baseline of sustainability disclosures

The International Sustainability Standards Board (ISSB) was established at COP26 to work on a global baseline of sustainability disclosures by the end of 2022. With the belief that disclosures are critical to monitoring progress against climate targets, the focus is on transparency and accountability. Disclosures are also seen as essential for monitoring the business risks inherent in moving to Net Zero.

The Climate Data Steering Committee has recently put forward its recommendations for the creation of the world’s first ever openly-accessible data platform which would standardise Net Zero data for companies’ climate pledges. This would allow all stakeholders, including policy-makers and investors to track companies’ progress on their path to Net Zero. The proposal is likely to be discussed at COP this year.

Scope 3 emissions measurement is a critical part of both the ISSB’s and SEC’s disclosure proposals (in addition to scope 1 and 2 emissions disclosures). Companies which have already begun measuring emissions across all three scopes, are likely to be in a much better position to meet these regulations when they are enforced. If you’re ready to calculate your complete supply chain carbon emissions, why not try Pledge and get started in minutes?

Canadian Prime Minister Justin Trudeau called for a global carbon tax at COP26, but there were concerns that the tax would put undue pressure on developing countries. COP26 also saw a proposal of new taxes on air travel and maritime shipping. All these proposals are likely to be discussed again this year.

While they might take a while to implement, companies engaging in logistics are wise to start measuring their emissions and taking climate action early. Switching to more sustainable forms of transport will mean incurring lower taxes should these be implemented in the near future.

While the agreement of Article 6 - a set of rules to govern the use of carbon markets was an important breakthrough at COP26, this year’s conference is likely to focus on the mechanisms of bringing these to life. Discussions are likely to focus on eligibility criteria for credits - particularly greenhouse gas emissions avoidance and the scope of disclosure obligations.

The International Emissions Trading Association has stated that trading carbon credits could save countries up to $250bn by 2030 on the cost of delivering their NDCs. But there is a fear that some companies will focus their efforts on purchasing credits, rather than on reducing their emissions.

At Pledge, we recognise the importance of all stages of the path to Net Zero. Using our solutions, businesses can calculate their emissions, identify their top emitters (for planning reduction activity), and finally address their residual emissions through our offsetting marketplace.

Connect with us at COP27

Find us at the Pledge stand in the Innovation Zone. Come and talk to our founders about how we’re supporting companies to get started on their sustainability journey in minutes. You’ll also have a chance to find out about some of the frontier carbon removal technologies available on our offsetting marketplace, including UNDO, Premier Forest, neustark, and Running Tide.

We’re very keen to make new connections, share knowledge and find out how we can rally together to take meaningful climate action.

Why not set up a meeting?

COP is a unique opportunity to meet in person with like-minded people united around the same mission. If you’re also attending, we would love to meet you. Just get in touch to schedule a meeting: hello@pledge.io.