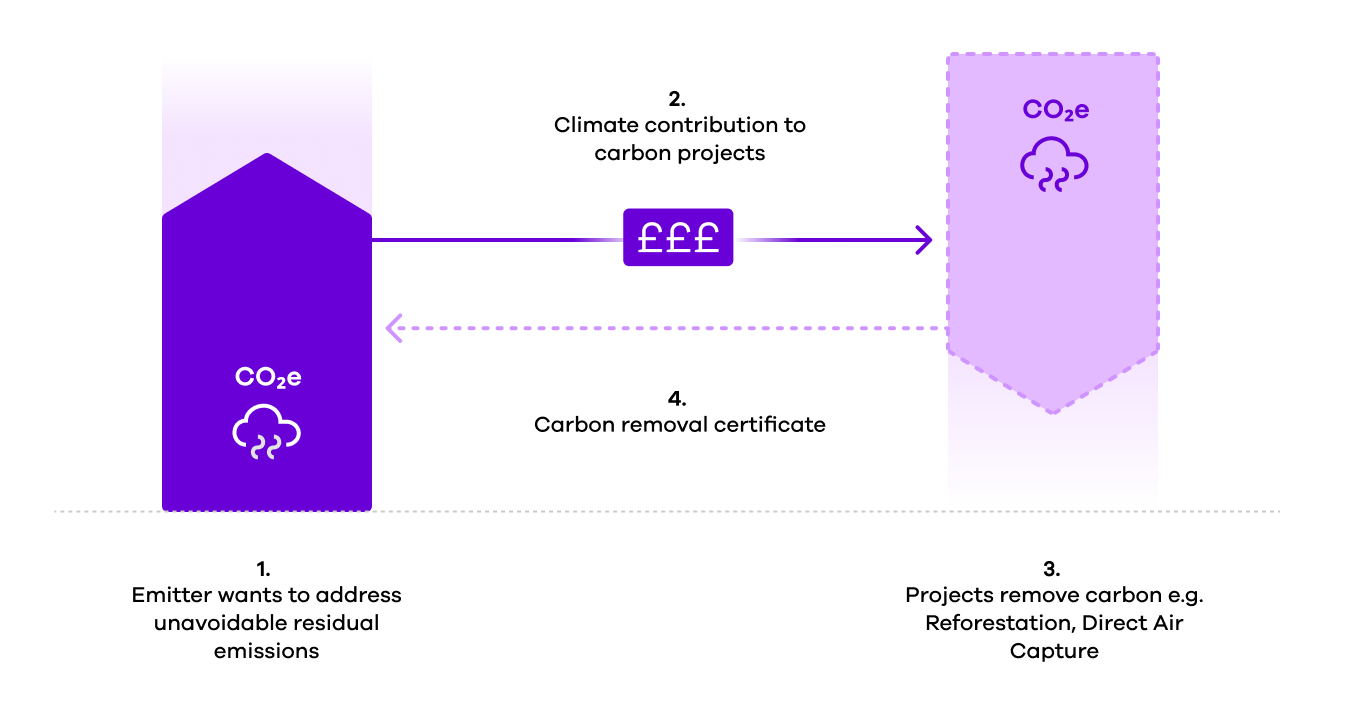 Throughout this series we’ve explored how organisations can contribute to the war against climate change by measuring, reducing, and finally offsetting their carbon emissions. It all begins with collecting the right data to gain a solid understanding of your biggest emitters and to spot opportunities for reduction. We should remember that the most sustainable and effective route to reaching ‘net-zero’ is through reduction. All too often companies focus on the final element of the sustainability equation — namely offsetting — as an easy way to counteract their emissions.

Offsetting is a credible solution for addressing residual carbon emissions that can’t be reduced by conventional means. As we explored in our last blog post, this is achieved by investing in projects in the Voluntary Carbon Markets, or VCM. But what makes a carbon project “good”? With so much project variety and climate jargon to contend with, how can businesses select high quality projects that make a lasting impact?

A significant first step in understanding the make-up of an offsetting project is whether it’s responsible for removing — otherwise known as sequestering, or capturing — carbon from the atmosphere, or by avoiding — or preventing — additional carbon from being emitted in the first place. Renewable energy is an example of an avoidance project, while reforestation or biochar production represent carbon removal initiatives. Some projects, such as improved forest management often include elements of both.

Avoidance and removal offsets are both essential if we’re to hit our global net zero targets. Relying just on removal doesn’t prevent new emissions from being released. Ultimately, a healthy offsetting portfolio should include both project types on the path to net-zero, as outlined in the ‘high ambition path to net zero’.

Nature Based Solutions Vs Engineered Removals

When choosing offsetting projects to invest in, there’s a second key offset differentiator to be aware of, and that’s whether a removal offset is nature-based, or generated via engineered solutions. As you might expect, nature-based solutions (NBS) refer to projects that address the carbon problem via natural ecosystems such as forestry, oceans, and even the ground we walk on.

Examples of NBS offsets include:

NBS offsets like those listed above are some of the most in demand carbon offsets on Voluntary Carbon Markets because they’re often more cost-effective and established than other methods such as engineered removal, as we’ll explore below. They also offer a range of secondary benefits including biodiversity protection and even societal benefits such as employment and flood protection.

Engineered removals, in contrast to NBS offsets, rely on technology and infrastructure to actively and (more) permanently sequester carbon. These projects vary in technological maturity, and in many instances, are underfunded or limited in scope because of implications such as cost, time to value, or even understanding from government bodies. However, engineered removal offsets are in many ways far-more effective than NBS removal offsets because of their permanence; biochar for example can sequester CO2 for hundreds or thousands of years compared to an estimated half-century for forestry projects (as trees will eventually die and release their sequestered carbon back into the atmosphere).

Examples of Engineered removals include:

Investment in engineered removals is critical if we’re to mitigate greenhouse gas emissions. 101 out of the 116 IPCC emissions scenarios depend on the use of carbon removal including the technologies outlined above.

It’s worth noting that engineered removal and NBS offsets aren’t the only two approaches. There are additional reduction offsets such as renewable energy and biogas plants, as well as improvements to infrastructure in developing countries such as better cookstoves and water filtration.

The cost of offsets varies considerably on a project-by-project basis. While the environmental output broadly remains the same — 1 tonne of carbon dioxide avoided or removed from the atmosphere per offset — the means are of course completely different.

The price of an offset is impacted by a number of factors, including but not limited to: the project type, the registry in which the project is issued, the vintage year, additional certifications of the offset, permanence, project location, and co-benefits delivered.

As mentioned above, engineered removals are currently generally more expensive than NBS approaches, partly because the underlying costs of the projects are higher, but also because they have a higher “permanence” associated with them — in other words, they may cost more, but can guarantee keeping CO2 out of the atmosphere for longer.

NBS offsets may also fluctuate in price due to “carbon plus” benefits — i.e. secondary opportunities such as biodiversity protection and community enhancements. These compelling and important benefits can drive prices up.

Onto the burning question — which offset to choose?

If the world is to contend with the rising threat of climate change, the ongoing development of offsets is critical to long-term success. Building a diverse offset portfolio offers many benefits over focusing on one particular offset model.

An analysis by Carbon Direct found that forest offset projects made up roughly 60% of carbon credits available in voluntary markets between 2015–2020, and this percentage is rising. While these initiatives are indeed viable, the future of carbon offsetting must include variety if we’re to scale, unlock the true value of new technologies, and ultimately use every carbon-reducing weapon in our arsenal.

Ultimately, there’s no single ‘best’ offset type. Investment across a range of projects is important to ensure your offsetting investment is making the most impact short-term, but also ensuring a healthy future of the offsetting industry long term.

Working with climate and sustainability experts can greatly help businesses looking to venture into carbon measurement, reduction and offsetting. In our final article in the series, we’ll explore how Pledge supports businesses to find success in their carbon management and net-zero objectives.